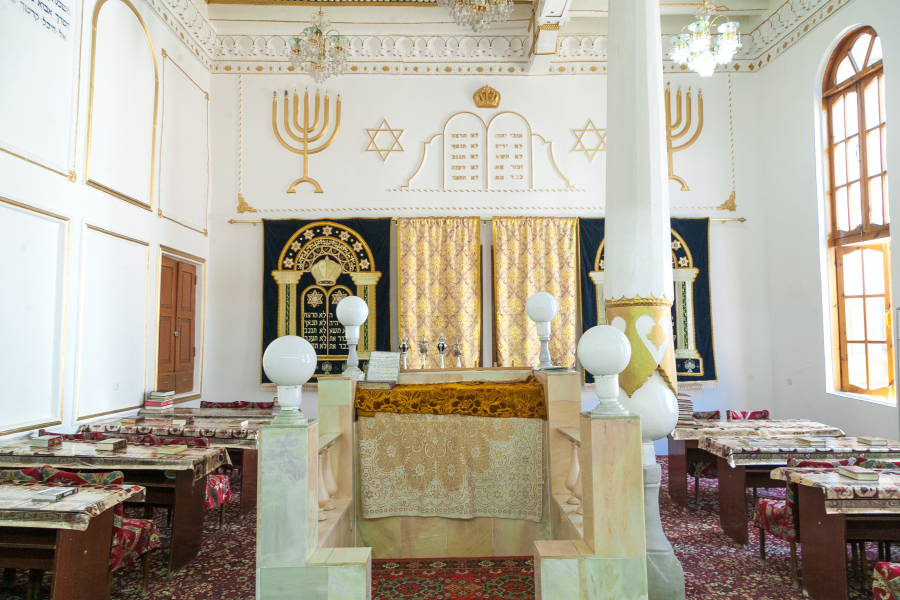 Join Silk Road Treasure Tours, trusted travel experts in Central Asia on this 11-day tour to Uzbekistan. In this relatively unexplored part of the world. Jewish history spans thousands of years and the synagogues, sites and historical quarters remain as proud witnesses to time and to the strength of the people who lived here. Come with us to discover ancient heritage sites or reconnect with Jewish roots in Uzbekistan.

With 3,000 years of history, culture and tradition in Uzbekistan, there’s a lot to discover. Travel in the footsteps of explorers, scholars, traders and marauders who plied the vast steppes, deserts and mountain ranges of the great Silk Road routes. Medieval palaces and fortresses, synagogues and mosques, UNESCO World Heritage sites, bazaars and caravanserais crowd the ancient oasis cities, dotted with glittering blue and gold tiled cupolas and warm adobe walls that change color in the setting sun. Markets are filled with colorful ikat fabric and elaborate Uzbek embroidery, cheery babaychik figurines, warm rounds of bread and piles of spices and dried fruits. Silk swirls around costumed performers dancing to the thrilling sounds of the tambour and dombra. Outdoor adventures can include camel rides and picnics in a desert yurt camp, hiking and trekking in the mountains, or enjoying the crystal-clear waters of an alpine lake. Uzbekistan is the heart of Central Asia, with a tradition of hospitality unmatched anywhere.

Travel from Tashkent, Uzbekistan’s modern capital, to the legendary cities of Samarkand and Bukhara, and west to fairy-tale Khiva. New high-speed trains whisk you between cities and air-conditioned vehicles transfer you between tour sites, airport and rail stations and your comfortable accommodations.

Arrival in Tashkent. There you will be met by our representative and transfer to the hotel. Tashkent Palace or Ichan Kala. Welcome dinner.

After breakfast start your sightseeing tour at the Applied and Decorative Art Museum of Uzbekistan set in an old house. We’ll visit the Bukharian Jewish Synagogue “Beit Menachem” (religious services held daily, morning and evening ), the old section of Tashkent, the Jewish community and school #321. At the colorful Chorsu bazaar, Jewish vendors are among the many who take part in this circular indoor-outdoor marketplace, crowded with stalls that sell everything from spices and nuts, to produce and flowers and traditional baby cradles. Originally Jews could not hold property,  though they were influential in the arts, crafts and academics. We’ll see Independence Square and some of the more important monuments, even take a ride on the metro to see the beautiful subway stations – Soviet style.

Breakfast. High speed train to legendary Samarkand. Day drive to legendary Samarkand, stopping near the "gate" of Amur Timur. It’s a lovely photo opportunity located along a mountain river between two steep gorges where Alexander the Great, Genghis Khan and Amir Timur all passed through with their armies. Samarkand itself was the site of Alexander’s marriage to the local Bactrian princess Roxana, and described by Marco Polo in his adventures.

All guest rooms in your hotel are located in the left wing with views of the city’s landmarks. Lunch. Sightseeing tour to Registan Square, the main attraction of Samarkand and an impressive venue for festivals and holiday celebrations with an extensive network of crafts and souvenir shops for tiles, ceramics, ikat fabric items, embroidery and the unglazed Samarkand pottery, often featuring whimsical dragons.  Learn about the astronomer Ulugbek at the remains of his Observatory.

Breakfast. Visit to Hebrew Prophet Daniel’s Tomb, the Jewish Quarter and Gumbaz synagogue located in the old section of Samarkand, and the Samarkand Siab bazaar.

Lunch at the hotel. Continue on to the fabulously tiled Shahi Zinda necropolis , the 14th century Bibi Khanum Complex (built in honor of the wife of Amur Timur) and ornate Guri Emir Mausoleum of Tamerlane himself. Dinner.

Sunrise photography. Take the stylish, high-speed Afrosyab train to the ancient oasis city of Bukhara where you’ll be welcomed with music, chai and sweets! Representatives of the Jewish community will be invited for a meeting. You will be accommodated at Sasha & Son. In the heart of Bukhara, this ancient Jewish merchant’s home is now a family-run boutique hotel. Dinner and Folk Show

Explore the Lyabi Khaus Complex of buildings around the pond, perfect for relaxing under the shade of the ancient mulberry trees. We’ll see the Nadir Divan Begi Khanaka and the Kulkadesh Madrasah there. The Lyabi Khauz pond dates from the 17th century when it was the principal source of water. It was built on the land of a Jewish widow, who was given land in exchange on which to build the synagogue and establish the Jewish Quarter Mahali Kuma. Stop for tea at a traditional chaykhana, learn about the sculpture of Khodja Nasreddin in bronze made by local artist Yaakov Shapiro, visit the Synagogue, the Jewish Quarter, old baths, school and kindergarten. When visiting the Chaukana and Avicenna synagogues,  you’ll be greeted with our traditional “Shalom Aleyhim” or “Peace be with you”.

Lunch and a national costume show at the restored house and museum of Fayzullo Khodjaev, a 19th century merchant.

Sightseeing continues with the 16th c. trade domes of the, hat sellers, silk, carpets, puppets and jewelry merchants, built on the Magoki Attar site, originally a Zoroastrian temple. This is where you’ll find Bukhara’s metalwork, jewelry and bespoke clothing designers. We’ll see the Abdulaziz Khan Madrasah with its beautifully decorated portal and sandali (old version of house heating), and the Poi-Kalon Ensemble with the greatest minaret of Central Asia and its 288 domes. Visit the 5th century Ark Fortress, the Bolo Khaus Mosque Complex, one of the only remaining buildings from the original city central square, and the small, fired-brick Ismail Samoni Mosque, one of the oldest existing buildings in Bukhara.

Breakfast. Visit Mohi Khosa Palace (The Palace of Moon and Stars, the summer residence of the old Khan) and the elegant Chor Minor Complex, with its four unique minarets. Make the most of your free time this afternoon to revisit shops, stop for spiced chai, enjoy the walkable historic core or find a place which may be important in your family history. Our guides and escorts are happy to help you get there.

Early breakfast. Departure to Khiva through the Kyzyl-Kum (Red Sand) desert, once the main Silk Road that connected East and West. Stop to visit yurt camps, take a photo with the camels, and have picnic in local Chaykhana (tea-house). We’ll see the Amu Darya (Oxus River), one of the biggest rivers of Central Asia. Transfer to the hotel. Dinner. (Transportation options include train or flight to Urgench/Khiva and a visit to the Savitsky Museum of Art)

Breakfast. Khiva is a "living museum", much of it beautifully restored. This fairy-tale city has some of the best-preserved historical architecture in the walled medieval Old City; the Ichan Kala. We’ll walk this vehicle-free area to see the Ata–Darvaza gates, the majestic, blue tiled Kalta Minar tower, the gorgeous Mohammad Amin Khan and Islam Khodja madrassahs, the Kunya Ark (Ancient Citadel), crenellated Tash Hauli Palace (with a peek into the palace's harem-quarter), and the tranquil Juma mosque with its 200 beautifully carved wooden pillars. The bazaar in Khiva is housed in an old caravanserai (traditional inn for travelling merchants), its huge doorways tall enough to welcome an elephant. Shops and stalls decorate the streets of Khiva as well, offering everything from Ikat scarves to furry chugirma hats, ceramics,  silk carpets and embroidery. The setting sun makes the warm adobe walls of Khiva change color and long shadows creep along the old alleyways. Dinner with a panoramic view of Khiva in moonlight. Transfer back to the hotel.

Morning flight to Tashkent. Upon arrival you will be transferred to the hotel for accommodation. Visit the Museum of the Timurids. Free time for shopping, relaxing or taking in one last museum or visit a place special to your family’s history.

Transfer to the airport for your flight home.