The archeological jewels, nomadic life and spectacular mountains of Uzbekistan 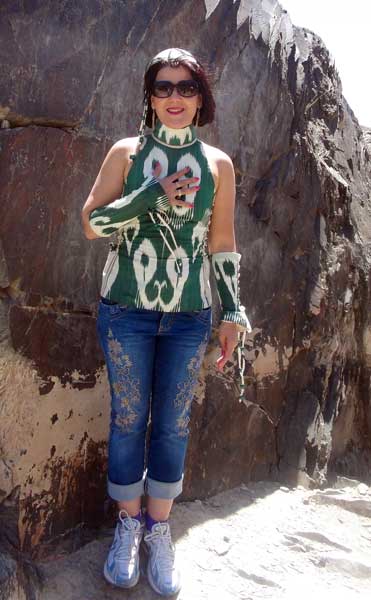 Central Asia has a many-layered history and its windswept landscapes have seen prehistoric hunter/gatherers, nomads, invading armies and the rise (and fall) of empires. One can practically touch history here; unlike so many other places, one can still get up close to ancient petroglyphs (rock carvings) and wander on foot through once mighty strongholds.
Over 150 sites with petroglyphs have been discovered in Uzbekistan, including in the Nurata mountains; with the Sarmyshsay petroglyphs in the Navoi region being particularly popular with visitors. These petroglyphs are wonderful works of primitive art, although "primitive" seems to be a strange word to use, when confronted with the sophistication of the execution, and the magical quality of the images. They go as far back as the bronze age, and reflect a hunting lifestyle depicting all kinds of animals both extant and extinct, as well as humans.
Remnants of the vast empires dating as far back as the 4th century BC through to the Sassanids (224-651 AD) can be seen in the fortresses of Tuproc Qala and Ayaz Kala. Perched on plateaus high above sweeping desert vistas, these fortresses which sometimes housed royal residences, were primarily built to protect agrarian subjects from invading nomadic hordes. The fortresses had crenelated turrets to defend from, and were designed ingeniously to trap an enemy once it had breached the walls. Mostly fashioned of a kind of mud brick, these impressive buildings have survived the searing winds and sandstorms of the region to differing degrees, thus placing them on the list of UNESCO's Endangered World Heritage Sites. Ayaz Kala is perhaps the best preserved of these, with enough left of the structure to easily imagine what it looked like and how it was used, when it was alive and functioning.
Those "searing winds" are responsible for the design of the classic Central Asian nomadic dwelling, the yurt. Its round shape sends the wind around it, rather than against it. Its lightweight wooden "mesh" walls are also easily dismantled, and its cloth and wool walls folded to make for easy traveling and setup. Nowadays there are more and more people living settled lives, but the further way from cities one gets, the more likely it is to find families that still live in yurts.
Whether they are settled or nomadic, Central Asian hospitality can actually be overwhelming to the uninitiated. Nothing is too good for the guest, and even a family with few resources will work all day to make a beautiful meal, and to provide entertainment. Perhaps a local musician will be brought in to sing ancient ballads; in that case, relax on the cushions, and prepare for time to slow down, and to be enjoyed at a leisurely pace. While the yurt is not a luxurious dwelling place, it is a model of economy and function, and it is worth the chance to spend the night in one, rather than be thrown on the mercy of some local motels, which can be primitive by tourist standards, with none of the down to earth charm of the yurt! And there is nothing to compare with spending the night in a yurt and arising at dawn in the desert to survey the suns first rays hitting the towering ruins of a Central Asian fortress.